In 1990, Mayor Bob Breeding and Vice-Mayor Margaret Pearson lead the way in transforming the original building of West Sparta Elementary School in to the City of Sparta Recreational Center. On March 24th, 1992 our local city government charted the YMCA which made the Sparta-White County Family YMCA officially validated to function under the name of the YMCA.

George Williams founded the YMCA in 1844

In 1844, industrialized London was a place of great turmoil and despair. For the young men who migrated to the city from rural areas to find jobs, London offered a bleak landscape of tenement housing and dangerous influences.
Twenty-two-year-old George Williams, a farmer-turned-department store worker, was troubled by what he saw. He joined 11 friends to organize the first Young Men’s Christian Association (YMCA), a refuge of Bible study and prayer for young men seeking escape from the hazards of life on the streets.

Although an association of young men meeting around a common purpose was nothing new, the Y offered something unique for its time. The organization’s drive to meet social need in the community was compelling, and its openness to members crossed the rigid lines separating English social classes.

Years later, retired Boston sea captain Thomas Valentine Sullivan, working as a marine missionary, noticed a similar need to create a safe “home away from home” for sailors and merchants. Inspired by the stories of the Y in England, he led the formation of the first U.S. YMCA at the Old South Church in Boston on December 29, 1851.

Today, the Y engages more than 10,000 neighborhoods across the U.S. As the nation’s leading nonprofit committed to helping people and communities to learn, grow and thrive, our contributions are both far-reaching and intimate—from influencing our nation’s culture during times of profound social change to the individual support we provide an adult learning to read.
By nurturing the potential of every child and teen, improving the nation’s health and well-being, and supporting and serving our neighbors, the Y ensures that everyone has the opportunity to become healthier, more confident, connected and secure.

YMCAs are collectively the largest not-for-profit community service organizations in the U.S. YMCAs are for people of all faiths, races, ages, abilities and incomes. Nobody is turned away for inability to pay. YMCAs are the heart of community life in America: 42 million families and 72 million households are located within three miles of a YMCA.

While local schools are closed due to coronavirus, the YMCA is offering emergency childcare for people who provide essential services. 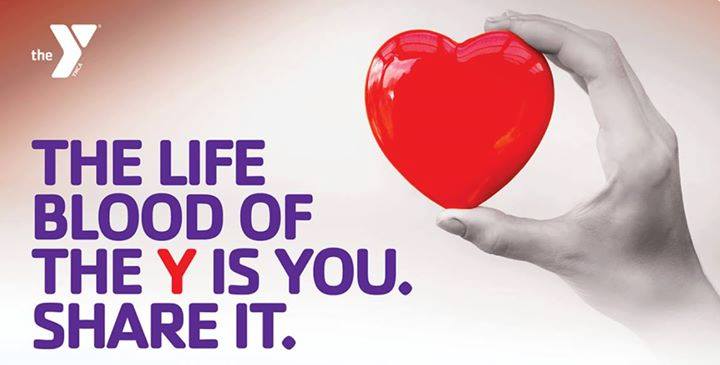 Click here to schedule an appointment to donate blood on Wednesday, April 29th.